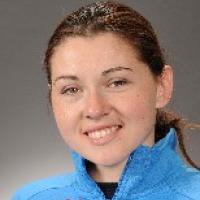 Awards and honours
In 2009 she received the Wheelchair and Ambulatory Sports USA's Spirit of Excellence Award. (wsusa.org, 04 Mar 2010)
Impairment
A spinal cord injury at birth resulted in quadriplegia. (youdontknowjersey.com, 04 Sep 2012)
Other information
ROBBERY
While competing at the 2012 Paralympic Games in London, her home in Toms River, NJ, United States was broken into. Money, jewellery and mementoes from her experiences at the 2000 and 2008 Paralympic Games were among the objects which were stolen. She appeared on US chat show Anderson Live. Unknown to her, the show had organised, with support from the US Paralympic Committee, to have all of the stolen items replaced. This included the watch she received at the 2008 Paralympic Games in Beijing. (andersoncooper.com, 24 Sep 2012)

GAP YEARS
After taking a break from athletics following the 2000 Paralympic Games in Sydney, she made a comeback to the sport in 2007. (US Paralympics, 04 Mar 2010)

VOLUNTEER
She volunteers with Habitat for Humanity, which helps build housing for those in poverty. (youdontknowjersey.com, 04 Sep 2012)