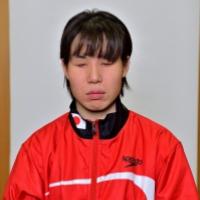 When and where did you begin this sport?
She began swimming at age seven in Obihiro, Japan.
Why this sport?
She learned about swimming lessons for people with visual impairments and immediately wanted to try. She also wanted to exercise to improve her health. "I've loved playing in the water since I was in kindergarten. There are obstacles on land. Although water is not a free space, I liked the feeling that I could move my body freely."
Club / Team
Aioi Nissay Dowa Insurance Corporation: Japan
Name of coach
Takumi Uegaki [national], JPN; Masato Teranishi [personal], JPN, from 2003

In 2011 she was given the Obihiro Sports Award in Japan. (city.obihiro.hokkaido.jp, 2017)
Impairment
She was born prematurely and lost her vision shortly afterwards. (Athlete, 06 Sep 2016)