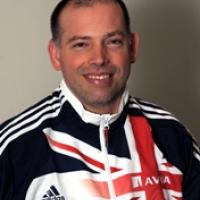 When and where did you begin this sport?
He began the sport at the age of 18 in Nottingham.
Club / Team
Mansfield Harriers: Mansfield, ENG
Name of coach
Phil Peat
Coach from which country?
England
Coach from what year?
2002

COMEBACK
He retired from athletics in 2004 after the Paralympic Games in Athens, but returned to the sport in 2007. (paralympics.org.uk, 28 Jan 2010)