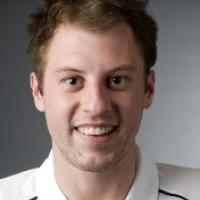 When and where did you begin this sport?
He has been involved in athletics since age five.
Why this sport?
His physiotherapist at the Royal Children's Hospital suggested he get into athletics. He continues to love athletics because of the opportunities to travel, make friends and stay fit.

Nicknames
Chris (Facebook profile, 24 Oct 2016)
Hobbies
Spending time with his friends, following Australian rules football and going to the movies. (Twitter profile, 01 Nov 2016; latrobe.edu.au, 04 Sep 2008)
Hero / Idol
Australian rules footballer James Hird, Australian para-athlete Heath Francis, and his grandparents. (paralympic.org.au, 06 Jan 2010, latrobe.edu.au, 04 Sep 2008)
Sporting philosophy / motto
"Every day I miss training is a day my rivals gain on me." (paralympic.org.au, 06 Jan 2010)
Awards and honours
He received the Medal of the Order of Australia in 2009 in recognition of his gold medal winning performance at the 2008 Paralympic Games in Beijing. (itsanhonour.gov.au, 06 Jan 2010)

He won Wheelchair Sports Victoria's Most Outstanding Performance by a Junior Male award for 2006. (paralympic.org.au, 06 Jan 2010)