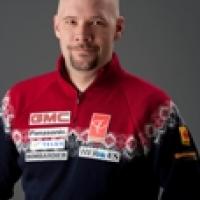 When and where did you begin this sport?
He began competing in 1997.

He missed the 2011/12 season because of a wrist injury which required four operations. (firsttracksonline.com, 20 Apr 2012)

Two days before the start of the 2002 Paralympic Winter Games in Salt Lake City, he fell during training and tore knee ligaments. He missed three events, but managed to race on the last day and win gold. (alpinecanada.org, 07 Feb 2013)
Superstitions / Rituals / Beliefs
He takes a photo album of his family with him to every competition. (paralympique.ca, 17 Jan 2015)
Other sports
He was previously a speed skater but retired soon after competing at the 1987 Canada Winter Games, because of a broken leg and ankle. (paralympic.ca, 25 Aug 2009)
Famous relatives
His father Peter competed in cycling at the 1967 Pan American Games in Winnipeg, MB, Canada, and in speed skating at the 1968 Olympic Winter Games in Grenoble. His brothers Tyler and Reece competed in speed skating at the 2003 and 2007 Canada Winter Games respectively. (paralympic.ca, 25 Aug 2009)
Impairment
He has macular degeneration caused by toxoplasmosis and retains about 6% of his visual field. (vancouver2010.com, 21 Mar 2010)
Other information
RETIREMENT
He announced his retirement from competitive para-alpine skiing in April 2015. (paralympic.org, 13 Apr 2015)

LAST MINUTE SWITCH
He was forced to switch guides in the week leading up to the 2014 Paralympic Games in Sochi. Williamson joined up with Nick Brush, who was his guide at the 2010 Games in Vancouver, after regular partner Robin Femy switched to compete with Williamson's Canadian teammate Mac Marcoux. The change came about after Marcoux's guide [and older brother] Billy Joe had to withdraw from the event with a back injury. (newswire.ca, 05 Mar 2014)

DOCUMENTARY STAR
In February 2014, he starred in a three-part documentary series called Milestones of Champions: The Journey of Canada's Paralympians. The series focused on eight Canadian athletes, highlighting their achievements and the challenges that they faced while preparing for the 2014 Paralympic Winter Games in Sochi. (ami.ca, 12 Feb 2014, sochi2014.com, 03 Mar 2014)