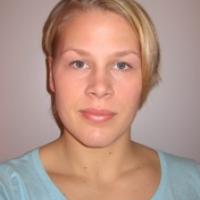 When and where did you begin this sport?
She took up Para cycling in 2013.
Club / Team
GC Nendorf: Germany
Name of coach
Patrick Kromer [national], GER; Ralf Lindschulten [personal], GER

In 2004 she received the honour of being added to the Golden Book in Dresden, Germany. (rollingplanet.net, 11 Oct 2013)
Other sports
She competed in swimming at the Paralympic Games in 2004, 2008 and 2012, claiming two bronze medals at the 2004 Games in Athens. (SportsDeskOnline, 07 Sep 2012)
Ambitions
To win a gold medal at the 2020 Paralympic Games in Tokyo. (rnz.de, 28 Jun 2017)
Impairment
At age five her right leg was amputated because of a malignant tumour. (ndr.de, 02 Sep 2017)
Other information
LATE REGISTRATION
The German Disabled Sports Association [DPS] failed to enter her in the 2017 Road World Championships in Pietermaritzburg, South Africa, after an administrative error. She found out while at a training camp in St. Moritz, Switzerland, and had already booked flights and accommodation for the event. She travelled anyway to support the rest of the team, but received a late entry to compete. She went on to win two gold medals. "It was a black day when I found out the error, but I was so happy to not only win the time trial, but being able to defend my world title in the road race." (dbs-npc.de, 03 Sep 2017; ndr.de, 02 Sep 2017; faz.net, 23 Aug 2017)