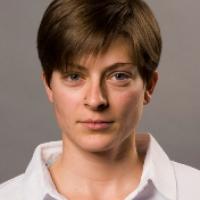 When and where did you begin this sport?
She began running with a prosthetic leg in 1997 in Germany, the country where she grew up.
Why this sport?
Her childhood dream was to become a top level athlete and she was inspired after visiting the 1996 Paralympic Games in Atlanta.

Nicknames
Wolfy (cairns.com.au, 09 Jun 2011)
Hobbies
Training in goldsmithing and silversmithing. (paralympiceducation.org.au, 13 Jan 2010)
Memorable sporting achievement
Winning gold for Australia in the long jump at the 2008 Paralympic Games in Beijing. (abc.net.au, 8 Sep 2008)
Awards and honours
She received the Medal of the Order of Australia [OAM] in 2009 in recognition of her performance at the 2008 Paralympic Games in Beijing. (itsanhonour.gov.au, 13 Jan 2010)
Impairment
She was diagnosed with cancer in her left leg at age 10 and spent the next five years in and out of hospital for chemotherapy treatment as she battled the condition. At age 15 she had the leg amputated above the knee. (paralympic.org.au, 13 Jan 2010)
Other information
FROM GERMANY TO AUSTRALIA
While competing for Germany at the 2004 Paralympic Games in Athens she met the Australian team and was invited to go to Canberra to train at the Australian Institute of Sport [AIS]. In 2005 she decided she wanted to move to Australia permanently and eventually started competing as an Australian. (paralympic.org.au, 13 Jan 2010)

RETIRED FROM ATHLETICS
She has retired from athletics and moved to Cairns, Australia, to start her personal training business, Christine Wolf Fitness. It specialises in workouts for disabled and elderly clients. (cairns.com.au, 09 Jun 2011)