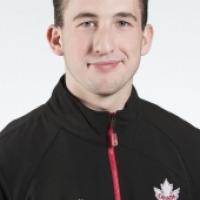 When and where did you begin this sport?
He began swimming at age 10.
Why this sport?
As a child he was afraid of water so his mother encouraged him to take swimming lessons. "It scared the heck out of me to get into the pool. It was one of the most terrifying events for me going to the pool. [Eventually] I got in the water because I wanted to do triathlon."
Club / Team
Kingston Y Penguins Aquatic Club: Canada
Name of coach
Vicki Keith [club], CAN

Nicknames
Chris (paralympic.ca, Aug 2015)
Hobbies
Basketball. (swimming.ca, Feb 2017)
Most influential person in career
Coach Vicki Keith. (thewhig.com, 21 Aug 2009)
Impairment
He was born with cerebral palsy. Doctors initially feared he would not live for more than a week, and if he did survive he would need a wheelchair. He defied both concerns and grew up without the need for a wheelchair. (natation.ca, 21 Jul 2010; thewhig.com, 21 Aug 2009)