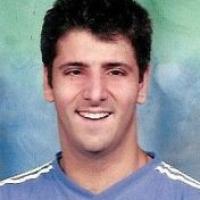 When and where did you begin this sport?
He began swimming in 1992.
Why this sport?
He took up the sport for rehabilitation, but soon began to train and take part in competitions. He loves swimming because it offers freedom and also has minimal risk of injuries.
Club / Team
PASKA [Hellenic Association of Physically Impaired]: Greece
Name of coach
Ioannis Alexakis [national], GRE; Archontia Kazaki [national], GRE

Hero / Idol
His father. (tampaxis.gr, 19 Nov 2010)
Awards and honours
He received a sporting achievement award in 2015 from the Greek Paralympic Committee. (paralympic.gr, 18 Dec 2015)

He was Greece's flag bearer at the opening ceremony of the 2012 Paralympic Games in London. (paralympic.org, 29 Aug 2012)

He was named the 2010 Sportsman with an Impairment of the Year by the Greek Sportscasters Association. (elpen.gr, 2012)
Impairment
He was born with cerebral palsy which resulted in partial quadriplegia. At age 13 he underwent surgery to partly restore mobility in his legs. (elpen.gr, 2012)