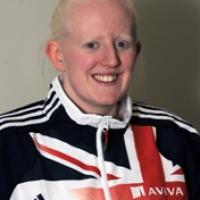 When and where did you begin this sport?
She took up athletics at age 13 at the 2000 West Wales Championships.
Why this sport?
She chose it as a social activity.
Club / Team
Carmarthen Harriers: Wales
Name of coach
Jim Edwards [personal], GBR, from 2003; Paula Dunn [national], GBR

Hobbies
She enjoys rugby union and follows the Llanelli Scarlets and the Welsh national team. (bbc.co.uk, 04 Feb 2010)
Memorable sporting achievement
Competing at her first Paralympic Games in Athens in 2004. (Athlete, 13 Dec 2010)
Most influential person in career
Her father. (Athlete, 13 Dec 2010)
Injuries
She injured her shoulder in 2009 and needed seven months to recover. (Athlete, 13 Dec 2010)
Other sports
She has also competed in able-bodied sport. She was Welsh schools champion in the hammer and discus, and Welsh national champion in the discus. (uka.org.uk, 04 Feb 2010)
Famous relatives
Her partner Kenny Churchill has also competed for Great Britain in para-sports. (channel4.com, 21 Aug 2012)
Other information
SPORTS MAD
She has loved sport since she was a toddler. At age four she refused to go on holiday with her parents because the 1992 Olympic Games in Barcelona were on television, staying with her grandparents instead so she did not miss any of the action. (bbc.co.uk, 04 Feb 2010)