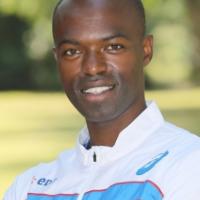 When and where did you begin this sport?
He took up the sport at age 14 in France.
Why this sport?
He began practising sport as a form of rehabilitation. He tried a number of sports before he was encouraged to get involved in athletics by a tutor. He was later inspired to take it up as a profession when he had the chance to see the 2000 Paralympic Games in Sydney. "There I saw [French Para athletes] Pierre Fairbank, Thierry Cibone, Stephane Bozzolo. They gave me the desire to try it. Para athletics is one of the most beautiful sports."
Training Regime
He trains two hours a day. He does physical workouts near Manosque, France, and completes track sessions in Pertuis, France.

Most influential person in career
His coaches. (Athlete, 23 Oct 2015)
Hero / Idol
Jamaican sprinter Usain Bolt, US sprinter Carl Lewis. (Athlete, 23 Oct 2015)
Sporting philosophy / motto
"Sport is the school of life." (actu.fr, 29 Aug 2019)
Awards and honours
He was flag bearer for France at the opening ceremony of the 2018 European Championships in Berlin, Germany. He carried out the same role at the opening ceremony of the 2015 World Championships in Doha, Qatar. (IPC, 20 Aug 2018; handisport.org, 22 Oct 2015)

FROM RWANDA TO FRANCE
He fled his native country, Rwanda, at age eight. His parents were killed during the Rwandan Civil War and he sustained a leg injury due to a grenade explosion. (franceolympique.com, 01 Jul 2012)