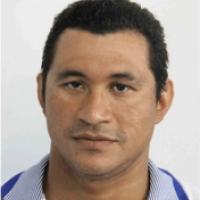 When and where did you begin this sport?
He took up the sport in 1996 in Natal, Brazil.
Why this sport?
He began swimming as part of his rehabilitation.

Nicknames
Tubarao Paraolimpico [Paralympic Shark]. (Facebook profile, 09 Dec 2016)
Most influential person in career
His mother Maria, and his family. (Athlete, 21 Jul 2015)
Hero / Idol
Brazilian motor racing driver Ayrton Senna. (Athlete, 21 Jul 2015)
Injuries
He was out of competition between 2013 and 2014 with two herniated discs. (globo.com, 18 Jul 2014)
Sporting philosophy / motto
"The taste of defeat is better than the shame of not having tried." (clodoaldosilva.com.br, 09 Apr 2010)
Awards and honours
He lit the Paralympic cauldron during the opening ceremony of the 2016 Paralympic Games in Rio de Janeiro. (paralympic.org, 10 Dec 2016)

He was named 2005 Athlete of the Year by the International Paralympic Committee [IPC]. (Facebook page, 10 Mar 2015)
Impairment
He has cerebral palsy due to a lack of oxygen at birth. The condition affects the movement of his legs and motor coordination. (Athlete, 21 Jul 2015)
Other information
RETIREMENT
He announced his retirement from competitive sport after participating at the 2016 Paralympic Games in Rio de Janeiro. "Now that I have retired, I want to continue inspiring people with or without impairment. I retired from the pool, but the work continues outside." (paralympic.org, 10 Dec 2016)

DOCUMENTARY STAR
In January 2016 a documentary on him titled 'Clodoaldo Silva, o Tubarao das Piscinas' [Clodoaldo Silva, the Shark of the Pools] was aired by ESPN. (cpb.org.br, 12 Jan 2016)

OTHER ACTIVITIES
He has given motivational speaking seminars, as well as hosting radio and television programmes in Brazil. (Athlete, 21 Jul 2015)