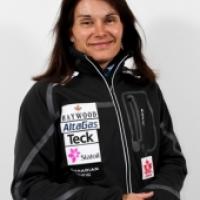 Hobbies
Reading, gardening, outdoor activities. (paralympic.ca, 01 Mar 2010)
Sporting philosophy / motto
"Attitude is everything. Life is 10% what happens to you and 90% how you react to it." (cccski.com, 23 Mar 2011)
Awards and honours
She has been named Saskatchewan's Female Athlete of the Year four times, including in 2010 when she was also inducted into the Canadian Disability Hall of Fame. (cccski.com, 16 Feb 2012)

In 2010 she was a recipient of the Whang Youn Dai Achievement Award. The solid gold medal recognises individuals who conquer adversity through the pursuit of excellence in sport. (cccski.com, 23 Mar 2011)

She was inducted into the Saskatoon Sport Hall of Fame in 1998. In the same year, she had a street in her home town named after her. In 1996 she was named Saskatoon Athlete of the Year, the Canadian Association of Disabled Skiing's [CADS] Nordic Athlete of the Year and was also awarded the Breakthrough Award by the Canadian Association for Advancement of Women [CAAWS]. (Vancouver, 12 Feb 2010)
Other sports
She competed at national level in cross-country running before her accident, and represented Canada at the 1992, 1996 and 2000 Paralympic Games in para-athletics. She won bronze medals in wheelchair racing in Barcelona in 1992 and Atlanta in 1996. (Vancouver, 12 Feb 2010)
Impairment
She was involved in a car accident in April 1980 which resulted in paralysis from the waist down. (paralympic.ca, 21 Mar 2010; Vancouver, 12 Feb 2010)
Other information
RETIREMENT
She announced her retirement from competition in April 2014. (paralympic.ca, 30 Apr 2014)

NATIONAL FIRST
She became the first Canadian athlete to compete at six Paralympic Winter Games, having appeared at every edition since the 1992 Games in Tignes up to and including Vancouver in 2010. (paralympic.ca, 11 Feb 2014)

DOCUMENTARY STAR
In February 2014, she starred in a three-part documentary series called Milestones of Champions: The Journey of Canada's Paralympians. The series focused on eight Canadian athletes, highlighting their achievements and the challenges that they faced while preparing for the 2014 Paralympic Winter Games in Sochi. (ami.ca, 12 Feb 2014, sochi2014.com, 03 Mar 2014)

OTHER ACTIVITIES
She has worked on a Canadian project called 'SASKI Skiing for Disabled' that recruits people with an impairment and teaches them the basics of skiing. " (paralympic.org, 08 Mar 2012)