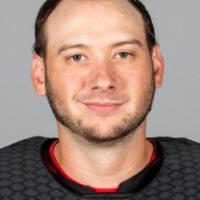 When and where did you begin this sport?
He began playing Para ice hockey in 2008 with the Windsor Ice Bullets in Ontario, Canada.
Why this sport?
He was encouraged to try the sport by Canadian Para ice hockey player Ray Grassi. "Without having a leg I was confused about what I could do and what I couldn't do. [But] when I went to practice with them it was like the whole sport just came back to life for me. I just stuck with it and I became a goalie again and just kept pushing myself to become the best I could be."
Name of coach
Ken Babey [national], CAN
Preferred position / style / stance / technique
Goaltender

Nicknames
Wats, Corb (sportsnet.ca, 03 May 2016; davidarrigo.com, 18 Mar 2015)
Most influential person in career
His family. (Athlete, 06 Mar 2014)
Hero / Idol
Canadian ice hockey goaltenders Martin Brodeur and Carey Price, Finnish ice hockey goaltender Miikka Kiprusoff. (paralympic.org, 13 Apr 2015)
Sporting philosophy / motto
"Anything can be done no matter what is wrong. You can do anything just look at me, I got one leg and I'm playing hockey all over again and I'm loving it. So no matter what keep going and keep moving forward." (Facebook profile, 06 Feb 2019)
Awards and honours
He was named in the All-Tournament Team at the 2016 Pan-Pacific Championships in Buffalo, NY, United States of America. (southshorebreaker.ca, 12 Apr 2016)

In June 2013 he was presented with the key to the city in Kingsville, ON, Canada. The honour was in recognition of his performances for the national team. (blackburnnews.com, 16 Jun 2013)
Impairment
His right leg was amputated below the knee after he was involved in a car accident in 2006. (Twitter profile, 07 Oct 2015; Athlete, 06 Mar 2014)
Other information
ADJUSTING TO PARA ICE HOCKEY
He played ice hockey for 16 years prior to his accident, which was an advantage when he got involved in Para ice hockey. "A lot of the upper body stuff is still the same as normal but the biggest thing to get used to is the change into the sled. I know that's the hardest part, trying to figure out how to move in it, how to get position in it. But once you start getting used to it, it's just like regular hockey all over again, just sitting down a bit." (capebretonpost.com, 02 Oct 2017)