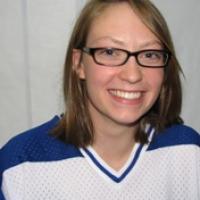 When and where did you begin this sport?
She took up the sport in 1998 at age seven in Alaska, United States of America.
Why this sport?
"My grandfather was involved in swimming, being one of the founders of the Swimming Hall of Fame. My father was an age group national record holder in swimming and my sister was a state champion swimmer. I began swimming for therapeutic purposes, but I fell in love with the sport."
Club / Team
Loyola University Maryland Swimming Team: Baltimore, MD, USA
Name of coach
Brian Loeffler [club], USA

Nicknames
Team Mom [her teamates call her this because she is always looking after people]. (teamusa.org, 13 Mar 2015)
Hobbies
Baking, writing, volunteering, spending time with family and friends. (Athlete, 07 Jan 2016)
Memorable sporting achievement
Winning gold in the S7 50m freestyle at the 2008 Paralympic Games in Beijing. (Athlete, 07 Jan 2016)
Most influential person in career
Her grandfather. (Athlete, 07 Jan 2016)
Hero / Idol
Her parents. (Athlete, 07 Jan 2016)
Sporting philosophy / motto
"The best way to cheer yourself up is to cheer someone else up." (Athlete, 07 Jan 2016)
Awards and honours
She was flag bearer for the United States of America at the opening ceremony of the 2013 World Championships in Montreal, QC, Canada. (paralympic.org, 11 Aug 2013)
Impairment
She has paralysis in the left side of her body due to cerebral palsy. Her condition means she has one leg shorter than the other, which creates tension in her back. (cnn.com, 21 Dec 2013)
Other information
OTHER STUDIES
In May 2016 she completed a master's degree in primary education from Loyola University Maryland in Baltimore, MD, United States of America. (myinfo.rio2016.com, 12 Sep 2016; teamusa.org, 13 Mar 2015)

CHARITY WORK
She has volunteered with the Jessie Rees Foundation in the United States of America. (Athlete, 07 Jan 2016)

AWARD FIRST
In 2013 she became the first Para athlete to be nominated for the National Collegiate Athletic Association [NCAA] Woman of the Year award. The honour recognises sporting and academic achievements. (teamusa.org, 25 Nov 2013)