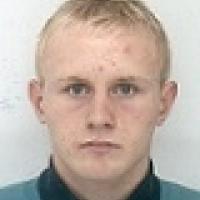 Injuries
He was forced to withdraw from the British trials for the 2016 Paralympic Games after he was diagnosed with shingles and viral meningitis. He was in hospital for five days and spent three months recovering. In 2017 he continued to feel lingering effects of the illness, with numbness and pain in his left leg. (justgiving.com, 05 Mar 2017)

A shoulder injury hampered his efforts to qualify for the 2013 World Championships. (swindonadvertiser.co.uk, 29 Jun 2013)
Famous relatives
His sister Danielle has competed in swimming for Swindon Dolphin ASC in England, while his father Andrew has coached the sport. (Andrew Harris Twitter profile, 17 May 2015; swindondolphin.co.uk, 2007)
Other information
OCCUPATION
He works as a plumbing apprentice at Affleck Mechanical Services in Swindon, England. (affleckmechanical.co.uk, 06 Oct 2018; Facebook profile, 31 Jul 2018)