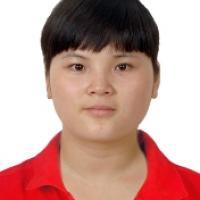 When and where did you begin this sport?
She began powerlifting in 2000 in Fuzhou, People's Republic of China.
Why this sport?
She was introduced to the sport by coach Tang Chunrong, who was looking for potential athletes. "At the beginning, I didn't know what Para powerlifting was about. Then I went to the training facility with the coach, I thought I may be able to find the meaning of life through this sport."
Club / Team
Jiangxi Province: China

She had an injury two months prior to the 2008 Paralympic Games. (sports.sohu.com, 12 Sep 2008)
Sporting philosophy / motto
"You can do anything as long as you have confidence and perseverance." (sina.com.cn, 12 Sep 2008)
Awards and honours
In recognition of her performance at the 2016 Paralympic Games in Rio de Janeiro, she was named an Advanced Individual by the provincial government of Jiangxi in the People's Republic of China. (mt.sohu.com, 09 Nov 2016)

In 2015 she was presented with a First Class Merit by the provincial government of Jiangxi in the People's Republic of China. (news.eastday.com, 18 Feb 2016)