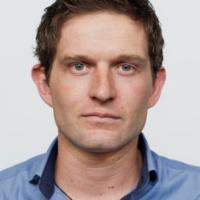 Memorable sporting achievement
Winning gold in wheelchair rugby at the 2004 Paralympic Games in Athens. (Attitude Youtube Channel, 08 Sep 2016)
Sporting philosophy / motto
"When there's something in the world that's bigger than yourself and you do it, there's great satisfaction." (stuff.co.nz, 06 Aug 2014)
Other sports
He competed in wheelchair rugby at the Paralympic Games in 2004 and 2008, winning gold at the 2004 Games in Athens. He also won silver at the world championships in 2006. (Attitude Youtube Channel, 08 Sep 2016; SportsDeskOnline, 01 Mar 2019)
Impairment
At age 18 he broke his neck in a rugby scrum, fracturing his sixth and seventh vertebrae. (paralympicsnz.org.nz, 08 Oct 2012; stuff.co.nz, 06 Aug 2014)
Other information
MEDIA ACTIVITIES
When the New Zealand wheelchair rugby team failed to qualify for the 2012 Paralympic Games in London, he worked as a commentator in London for the IPC and New Zealand television. He has also worked as a producer and presenter for the New Zealand TV programme 'Attitude', including at the 2014 Paralympic Winter Games in Sochi and the 2016 Paralympic Games in Rio de Janeiro. (Attitude Youtube Channel, 08 Sep 2016; attitudepictures.com, 10 Oct 2012)

WHEELCHAIR RUGBY BACKGROUND
He says he felt immediately drawn to wheelchair rugby after being introduced to the game by a nurse, who told him most of the guys who play were also former able-bodied rugby players. "I instantly felt a connection to the people that played this sport. as I was nearing the end of my rehab, I went along to watch the New Zealand team, the 'Wheel Blacks', train. Initially I was impressed by the speed with which they seemingly glided around the court and also the power with which they hit each other. The fact that they were tetraplegics with only about 10 to 20 percent of the muscles working made it all the more impressive. At the end of training they let me have a go in one of their chairs and from then it was all on. I began playing and training with the Canterbury side. By 2001 I was a part of the Wheel Blacks [New Zealand national team]." (paralympicsnz.org.nz, 10 Oct 2012)

FURTHER STUDIES
He has also studied a certificate in fitness management and sport science at University of Otago in New Zealand, and attended two years at the Australian Film Television and Radio School. (LinkedIn profile, 01 Nov 2016)