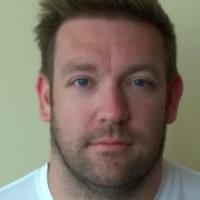 When and where did you begin this sport?
He took up athletics at age 14 in Loughborough, England.
Why this sport?
He showed potential at a young age, so he decided to pursue the sport at an elite level.
Club / Team
Charnwood Athletic Club: Loughborough, ENG
Name of coach
Zane Duquemin, GBR

A minor chest injury prevented him from competing at the 2015 Anniversary Games in London, England. (Facebook page, 18 Jun 2018)

He suffered a hernia a month before the 2012 Paralympic Games in London. (thisisleicestershire.co.uk, 15 Jun 2013)

He had a knee arthroscopy before the 2006 World Championships in Assen, Netherlands, and was only able to start training again two weeks before the event. Despite this he retained his title. (paralympics.org.uk, 21 Jan 2010)
Sporting philosophy / motto
"Quitters never win and winners never quit." (Athlete, 13 Dec 2010)
Awards and honours
Along with javelin thrower Hollie Arnold, he served as joint-captain of the Great Britain Para athletics team at the 2017 World Championships in London, England. (athleticsweekly.com, 26 Jun 2017)

In 2017 he was inducted into Loughborough University's Sporting Hall of Fame. (loughboroughecho.net, 03 Jul 2017)

He was named the 2012 Sports Personality of the Year by the Leicester Mercury newspaper in England. (thisisleicestershire.co.uk, 15 Jun 2013)
Other sports
He was a junior international for Great Britain in able-bodied athletics. (independent.co.uk, 30 Aug 2012)
Famous relatives
His uncle was a mechanic for Scottish Formula One driver Jackie Stewart. (paralympics.org.uk, 21 Jan 2010)
Ambitions
To win a medal at the 2020 Paralympic Games in Tokyo. (bbc.co.uk, 04 Sep 2020)
Impairment
He has congenital talipes equinovarus [club foot]. (Athlete, 13 Dec 2010)
Other information
OVERCOMING INJURY
After winning a bronze medal at the 2016 Paralympic Games in Rio de Janeiro, he initially ruled himself out of competing at the 2020 Games in Tokyo. He reconsidered taking part in the 2020 Games after he threw a personal best in 2018, before sustaining a bone bruise to his hip the following year. "My hips play a huge part in my throw and I couldn't do that for a good six, seven months. We've had to really look at my posture and been doing lots of yoga. Sometimes you have to calm things down and admit I'm 38, I can't do something I was doing when I was 25, 26. It has actually changed my outlook on how to perform. It's just not sustainable and I want to be able to play with my kids in the future, and go to the football and not have a bad back or a bad hip. In hindsight it's a good thing the Paralympics got pushed back because I only started throwing in January 2020 and I think it would have been too soon to put in a performance that I know I am worthy of." (expressandstar.com, 21 Jul 2021)

COACH CHANGE
He says a change of coach to working with Zane Duquemin has helped his career. "I've been in the sport for 21 years [speaking in 2021] and I didn't think I could learn much more about discus, but this past 18 months I've been with him I've learnt loads more and feel like I'm probably the best technically I've ever been.” (expressandstar.com, 21 Jul 2021)

FURTHER STUDIES
After completing a bachelor's degree in sport and exercise science in 2006, he continued his studies at Loughborough University, completing a master's degree in exercise science and sport management in 2009. In 2018 he was awarded an honorary doctorate by Loughborough University. (LinkedIn profile, 01 Jan 2014; lboro.ac.uk, 17 Jul 2018)