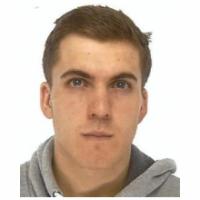 When and where did you begin this sport?
He took up Para athletics in 2013 in Liverpool, England.
Why this sport?
He competed in judo at international level but became homesick after four years living and training in Kent, England. He moved back to Liverpool where he found he needed an outlet for his competitive nature. This led to him taking up Para athletics.
Club / Team
GNR8 Academy: Loughborough, ENG

Nicknames
Sausages ["Everyone says that seeing me in the morning is like watching the evolution of man. My coach was talking to me once and I was in my own little world and he threw in the word 'sausages' in the middle of a sentence. Afterwards he said, 'You didn't hear me, did you?' So now my nickname is 'Sausages'."] (channel4.com, 21 Nov 2011)
Most influential person in career
His father. (Athlete, 26 Aug 2012)
Injuries
In June 2018 he had knee reconstruction surgery. (Facebook profile, 08 Jun 2018)

In 2015 he had pneumonia, tore a hamstring and also sustained injuries after he was hit by a car. (disabilitysportsnews.com, 10 Apr 2016)
Awards and honours
In 2017 he was runner-up for both Disabled Sportsman of the Year and Senior Volunteer of the Year at Charnwood Sports Awards. (loughboroughecho.net, 06 Dec 2017)
Other sports
He represented Great Britain in judo at the 2012 Paralympic Games in London, where he finished seventh in 81kg category. (paralympics.org.uk, 2012)
Famous relatives
His partner Libby Clegg represented Great Britain in athletics at the Paralympic Games in 2008, 2012 and 2016, winning a total of two gold and two silver medals. His older brother Marc and his father Terry have both represented Great Britain in judo at the Paralympic Games. Marc competed at the 2012 Games in London, while Terry participated at the 1988, 1996 and 2000 editions of the Games. (eladvertiser.co.uk, 04 Jan 2017; paralympics.org.uk, 2012)
Impairment
His vision is affected by cone-rod dystrophy, a visual impairment that runs in his family. (givemesport.com, 28 Jul 2015)
Other information
OCCUPATION
He has studied a degree in personal training and a diploma in sports massage, and worked as a personal trainer and gym instructor at Loughborough Leisure Centre in England. He is also the founder of Ability Training alongside partner Libby Clegg, which offers Para sport awareness courses for sports and fitness professionals. (Facebook profile, 08 Jun 2018; Twitter profile, 27 Jun 2018; ability-training.com, 23 Oct 2017)

NINJA WARRIOR
In 2018 he took part in the television programme 'Ninja Warrior UK'. He was the first contestant with a visual impairment to compete in the show. "Ninja Warrior was a hundred times scarier than competing in London 2012. In London 2012 I knew what I was there to do, I knew what I was going into, I had practised loads. The crowd at Ninja Warrior was amazing though, it was just like the Paralympics. It made the hairs stand up on the back of your neck." (Instagram profile, 08 Jun 2018; thesun.co.uk, 27 Apr 2018)