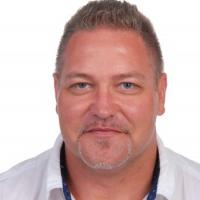 When and where did you begin this sport?
He took up the sport in 2010.
Why this sport?
Growing up he was a keen footballer but multiple injuries prevented him from pursuing a professional career. After recovering from his stroke, he wanted to become more active and was introduced to Para sports by Para alpine skier Gerd Schonfelder and Para athlete Birgit Kober.
Club / Team
HSC Erfurt: Germany
Name of coach
Marion Peters [national]

He was included in the Golden Book of Weiden, Germany for his achievements at the 2016 Paralympic Games in Rio de Janeiro. (onetz.de, 27 Sep 2016)
Other sports
He played football at national youth level in Chemnitz, Germany. (Athlete, 17 Jul 2017)
Milestones
At the 2016 Paralympic Games in Rio de Janeiro his gold medal in F33 shot put at age 43 years and 241 days made him the oldest male German Para athletics competitor to win gold at the 2016 Games. (SportsDeskOnline, 22 Apr 2021)
Ambitions
To win a medal at the 2020 Paralympic Games in Tokyo. (thueringer-allgemeine.de, 07 Apr 2021)
Impairment
He had a stroke in 2008 which resulted in quadriplegia. (Athlete, 17 Jul 2017; sueddeutsche.de, 16 Jul 2017)
Other information
MENTAL HEALTH
He believes taking up Para athletics aided his recovery from depression following the stroke he suffered that resulted in quadriplegia in 2008. "I got depressed and felt the sky was falling on my head. Some believed that I would not amount to anything again, but sport gave me a second chance." (Athlete, 17 Jul 2017; sueddeutsche.de, 16 Jul 2017)