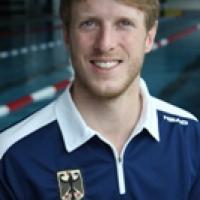 When and where did you begin this sport?
He began competitive swimming in 2004 in Darmstadt, Germany.
Why this sport?
His teacher advised him to take up a sport and he decided to begin swimming because this seemed the most obvious choice for his abilities.
Club / Team
VSG Darmstadt [GER] / Berliner Schwimmteam [GER]:
Name of coach
Phillip Semechin, GER, from 2016

In 2011 he was named the Athlete of the Year in the Para sport category by the Olympic Sports Federation of Hesse, Germany. (olympische-ballnacht.de, 25 Oct 2011)