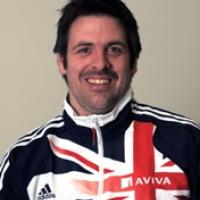 When and where did you begin this sport?
He took up athletics in 1989 at age 11 in Cambridge, England.
Why this sport?
He likes all sports but athletics is what he enjoys most.
Name of coach
Paula Dunn [national]
Coach from which country?
Great Britain

Nicknames
Westy (Athlete, 12 Jan 2011)
Hobbies
Supporting English football club Tottenham Hotspur. (paralympics.org.uk, 27 Aug 2012)
Memorable sporting achievement
Winning two silver medals at the 2006 World Championships in Assen, Netherlands. (Athlete, 12 Jan 2011)
Injuries
He injured his thigh and shin during the F33-4/52 shot put final at the 2008 Paralympic Games in Beijing when a loose chair strap caused him to fall to the ground during a throw. He has also cracked a rib in the past. (Athlete, 09 Dec 2010; lboro.ac.uk, 14 Sep 2008)
Impairment
He has cerebral palsy. (paralympics.org.uk, 27 Aug 2012)
Other information
OCCUPATION
He works as a satellite clubs officer for Sport Nottinghamshire. He previously worked as a marketing and communications assistant for the English Federation of Disability Sport. (sportnottinghamshire.co.uk, 26 Mar 2014)