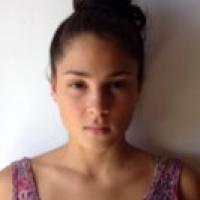 When and where did you begin this sport?
She took up the sport at age five in Resistencia, Argentina.
Why this sport?
"My parents were told I was going to be dependent on someone for my whole life, but they didn't believe it so they enrolled me in swimming, artistic yoga, and gymnastics."
Training Regime
She trains twice a day, six days per week at the National High Performance Centre [CENARD] in Buenos Aires, Argentina.

She has suffered from chronic tendinitis in both her shoulders during her career. (Deportv YouTube channel, 01 Sep 2016)

She was unable to compete for five months in 2013 after having knee surgery. (Athlete, 09 Sep 2019)
Sporting philosophy / motto
"In a competition, everything that could be done has been done. So now relax and enjoy the ride." (Athlete, 09 Sep 2019)
Awards and honours
In 2015 she received the Olimpia de Plata, an award given to Argentina's best Paralympic athlete of the year. (cap.org.ar, 11 Jan 2016)

She was flag bearer for Argentina at the closing ceremony of the 2015 Parapan American Games in Toronto, ON, Canada. (paralympic.org, 15 Aug 2015)
Impairment
She was born without her left hand. (Athlete, 09 Sep 2019)
Other information
STUMP NICKNAME
She names her right arm stump as 'Gusa,' a contraction of the Spanish word for 'little worm' [Gusanito]. "I was born like that, with a malformation in my arm, and I have felt comfortable with my body since I was a child. My stump has a name. When I was younger, my friends and I named it 'Gusanito' and it stuck." (enganche.com.ar, 30 Aug 2020)

SPELL IN AUSTRALIA
She moved to Australia in 2013, following a former partner, and trained there for a year before returning to Buenos Aires, Argentina. "My roots began pulling me. I did not want to be there anymore and he did not want to go to Argentina. In Australia, athletes train up until noon, and after that I did not have anything to do. Grants in Australia are less than in Argentina." (elequipo-deportea.com, 15 May 2017; parati.com.ar, 01 Sep 2016)

FURTHER EDUCATION
She has studied marketing and sports business at the Pontifical Catholic University of Argentina in Buenos Aires. (Athlete, 03 Dec 2017; elequipo-deportea.com, 15 May 2017)