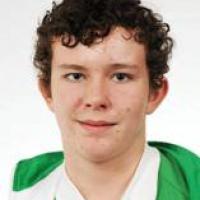 When and where did you begin this sport?
He took up swimming in 2005 at the Courtown Swimming Club in Gorey, Ireland.
Why this sport?
His parents got him involved in swimming so that he would feel more comfortable in the water.

He has had shoulder injuries. (Bebo Profile, 07 Jun 2011)
Sporting philosophy / motto
"If I don't find a way, I'll make one." (Athlete, 03 Aug 2011)
Awards and honours
He was named the Swimmer with an Impairment of the Year at the 2014 Swim Ireland Annual Awards. (swimireland.ie, 13 Apr 2014)
Impairment
He was born without a lower arm and missing both legs below the knees. (irishsportscouncil.ie, 01 Sep 2008; darragh-mcdonald.blogspot.com, 03 Jun 2011)
Other information
RETIREMENT
He announced his retirement from competitive para-swimming in November 2015. "After over a decade of competitive swimming and much thought and deliberation, I've made the difficult decision to retire. This decision hasn't been an easy one but following on from two years of arguments and countless broken deals, I now have to walk away from the madness and focus on life moving forward and the real world." (Facebook profile, 17 Nov 2015)

HISTORY MAKER
His silver medal at age 14 at the 2008 Paralympic Games in Beijing made him the youngest Irish swimmer at the time to win a Paralympic medal. (irishsportscouncil.ie, 01 Sep 2008)