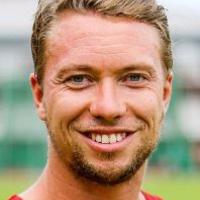 When and where did you begin this sport?
He took up Para athletics in 2008.
Why this sport?
While recovering in hospital he was inspired to take up the sport after watching a documentary about South African Para athlete Oscar Pistorius. "At that moment I knew - this is my new goal. This moment gave me a lot of strength."
Club / Team
TSV Bayer 04 Leverkusen: Germany
Name of coach
Karl-Heinz Due [club], GER; Marion Peters [national], GER

In July 2017, shortly before competing in the 2017 World Championships in London, England, he suffered a muscle tear and had to withdraw from the event. (ergo.com, 17 Jul 2017)

He suffered from a blood clot in his knee for six weeks in early 2016. He returned to competition in May 2016 at an international event in Barcelona, Spain. (sport-magazine.co.uk, 26 May 2016; blog.ergo.de, 11 May 2016)
Sporting philosophy / motto
"If I feel pain during training and just do not feel like it, then I imagine my goals." (magazin.bayer.de, 28 Jun 2019)
Awards and honours
He and fellow 4x100m relay runners Johannes Floors, Markus Rehm, and Felix Streng were named the 2016 Team of the Year by the National Paralympic Committee of Germany [DBS]. (paralympic.org, 29 Nov 2016)

He received the Sportsman of the Year award in 2012 and 2013 in Moers, Germany. (rp-online.de, 26 Jan 2013)
Other sports
He competed in motocross at youth international level. (dirkschmidt.com, 22 Jan 2019)
Ambitions
To win a medal at the 2020 Paralympic Games in Tokyo. (dirkschmidt.com, 22 Jan 2019)
Impairment
In 2007 he was hit by a train while walking his bike across a railway line. Both of his legs have been amputated below the knee. "I now celebrate my birthday twice, as in a way, I was born twice. On the day of the accident and the day I was born. Even if it might sound strange, I don't want my legs back today. I am happy in my new life on prostheses and satisfied. I enjoy every day and hope the end of my career is still far away." (waz.de, 18 Dec 2013; davidbehre.com, 12 Dec 2013; maz-online.de, 18 Sep 2013; derwesten.de, 24 Dec 2009)
Other information
UNIVERSAL MIXED RELAY REACTION
He is not a fan of the 4x100m universal mixed relay, which was introduced at the world championships from 2019 as well as the 2020 Paralympic Games in Tokyo. The mixed events replaced relay events that German teams were traditionally successful. "It is clearly a wrong decision. It's a step backwards. It seems like it's not about competitive sports anymore but rather 'having fun together' where performance is secondary. The previous relay events were exciting and attractive and appealed to the audience." (zdf.de, 07 Nov 2019)

RETIREMENT PLAN
He intends to retire from the sport after the 2020 Paralympic Games in Tokyo. "I'm afraid it will be the last Paralympic Games for me. Even in training already my regenerative ability is significantly worse than with a 23 or 24-year-old. I still want to finish my competitive sports career well. And then, if Tokyo is successful, I can look back on a wonderful time in athletics. I very much hope that the Games in Tokyo will be made up for in 2021, and I can say goodbye to the sporting stage in a great setting." (rehacare.de, 04 May 2020; faz.net, 28 Aug 2019; dirkschmidt.com, 11 Jan 2019)

OCCUPATION
He works as motivational speaker and visits hospital patients who have been involved in serious accidents. "I make it clear that they only have to believe in themselves. Usually the ice breaks when the patients see my prostheses. They understand that I know what I'm talking about and that I can empathise with their situation. That motivates them, and I also take something from these encounters and draw a lot of new motivation from it." (magazin.bayer.de, 28 Jun 2019)

AUTHOR
In 2013 he published a book about his life called 'Sprint zuruck ins Leben' [Sprinting Back to Life]. In 2020 he released a second book, 'Innere Starke – Heute beginnt dein Sprint ins Leben' [Inner Strength - Your Sprint into Life]. "With my [2013] book I want to give other people who, like me suffered a terrible stroke of fate, courage. Never give up and do not lose faith in yourself." (Facebook profile, 24 Oct 2020; randomhouse.de, 21 Apr 2013; biderundtanner.ch, 01 Apr 2013)