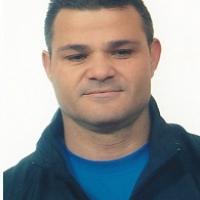 Nicknames
Bou (valenciaplaza.com, 26 Nov 2011)
Sporting philosophy / motto
"If there is a barrier, I smash through it." (elmundo.es, 24 Sep 2012)
Awards and honours
In 2018 he received an acknowledgement for his sporting career from the Catholic University San Antonio of Murcia [UCAM], in Spain. (davidcasinos.es, 01 Jun 2018)

He was presented with the National Award of the Spanish Association of Sports Press in 2014. (davidcasinos.es, 01 Jun 2018)

He was Spain's flag bearer at the opening ceremony of the 2008 Paralympic Games in Beijing. (marca.com, 17 Oct 2013)
Ambitions
To compete at the 2020 Paralympic Games in Tokyo in Para cycling. (marca.com, 04 Jul 2017)
Impairment
He lost his sight in 1998 through diabetic retinopathy. The condition was discovered after a routine visit to his doctor at age 10. (davidcasinos.es, 01 Apr 2014)
Other information
SWITCHING SPORT
In 2017 he decided to quit Para athletics and switch to Para track cycling, with the aim of competing at the 2020 Paralympic Games in Tokyo. "The flame has gone. It's time to say farewell to the sport that changed my life. I want to keep on dreaming with the Paralympics in Tokyo, and I want to do it on a bike, at high speed and no brakes." (marca.com, 04 Jul 2017)

BOOK
In 2013 a biography about his life was published called 'Todos los dias sale el sol y si no sale, ya me encargo yo de sacarlo' [Every day the sun rises, and if it does not, I will carry on without it]. (marca.com, 17 Oct 2013)

MOTIVATIONAL HEALTH
During the 2017/18 season he was approached by Diego Simeone, coach of Spanish football club Atletico Madrid, to give a motivational talk to the team's players. "They [the players] have to have faith in their guide, their coach, with a clear message that everything can be done. In the end it is a blind faith in what you do. The players and the coach need to trust each other. At the end [of the talk], the team reacted marvellously, I could feel it. They all gave me a hug." (lasexta.com, 02 Mar 2018)