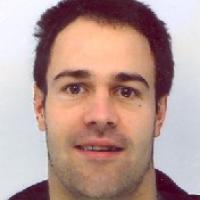 When and where did you begin this sport?
He began swimming at age 11 in Cardiff, Wales, after being diagnosed with cerebral palsy.
Why this sport?
He was told it was the best physiotherapy for cerebral palsy.
Club / Team
Caerphilly: Swansea, WAL
Name of coach
Peter Key
Training Regime
He spends 16 hours a week in the pool and four hours a week in the gym.

In October 2009 he fractured his elbow when he was walking his dog. His lurcher-collie dragged him into a tree. (The Telegraph, 30 Aug 2011)
Superstitions / Rituals / Beliefs
He always sets his goggles on the starting blocks while he takes off his tracksuit and gets in position to start a race. (The Telegraph, 30 Aug 2011)
Sporting philosophy / motto
"Enjoy the ride." (swimming.org, 19 Aug 2010)
Awards and honours
In 2009 he was made a Commander of the Order of the British Empire [CBE], after having been made a Member of the Order of the British Empire [MBE] in 2005. (paralympics.org.uk, 29 Jan 2010; bbc.co.uk, 2 Sep 2008)

He was selected to carry the flag for Great Britain at the Closing Ceremony of the 2008 Paralympic Games in Beijing. (bbc.co.uk, 11 Nov 2008)

His four gold medals at the 2008 Paralympic Games in Beijing gave him a total of 11 Paralympic golds, equalling Tanni Grey-Thompson's record for the most Paralympic gold medals won by a British athlete. (bbc.co.uk, 11 Nov 2009)
Impairment
He was diagnosed with cerebral palsy at the age of 11. (The Telegraph, 30 Aug 2011)
Other information
COMMUNITY WORK
He has a close involvement with Anti-Bullying Week, and admits that he himself was bullied as a child on account of his disability and the way it caused him to walk. He also runs a disabled swimming club and visits schools to promote disabled sports. (bbc.co.uk, 11 Nov 2008)