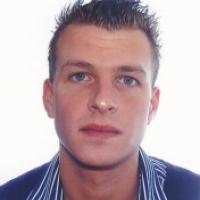 When and where did you begin this sport?
He began snowboarding at age 10, and took up Para snowboard following his accident.
Why this sport?
Snowboarding had always been his favourite sport.

Injuries
He missed the start of the 2014/15 season to undergo leg surgery. (nieuwsblad.be, 13 Nov 2014)
Sporting philosophy / motto
"I do not adapt to my disability, my disability must adapt to me." (Facebook profile, 19 Jun 2013)
Awards and honours
In January 2015 he was presented with a trophy for sporting merit by the Belgian Paralympic Committee. (hln.be, 29 Jan 2015)

He was Belgium's flag bearer at the opening ceremony of the 2014 Paralympic Winter Games in Sochi. (paralympic.org, 07 Mar 2014)
Impairment
In 2007 he was involved in a collision with a car while riding his bicycle. His lower leg was severed in the incident and he was fitted with a prosthesis shortly after. (nieuwsblad.be, 07 Jun 2012)