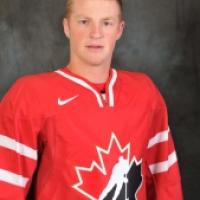 When and where did you begin this sport?
He took up the sport in 2000 at the Chatham Treatment Center in Ontario, Canada.
Why this sport?
"My dream was to play in the NHL, and playing ice sledge hockey is the closest thing to that."
Name of coach
Ken Babey [national], CAN
Preferred position / style / stance / technique
Forward

In early 2013 he was ruled out for two months after undergoing surgery to remove a swollen lymph node in his hand. It had become infected by an ice hockey sledge glove. (paralympic.ca, Mar 2014)
Superstitions / Rituals / Beliefs
He travels with a Dom Strong t-shirt in memory of Dominic Rooney, a child from Medicine Hat, AB, Canada, who died of leukaemia in 2015. (chathamdailynews.ca, 29 Sep 2015)
Sporting philosophy / motto
"Hockey, like all sports, is a simple game that we all make complicated. It is the same as life. If we do the best we can with what skills we have and trust those around us to do the same, then I think that is all anyone can ask for." (Athlete, 06 Mar 2014)
Other sports
He won a bronze medal in seven-a-side football at the 2007 Parapan American Games in Rio de Janeiro, Brazil. (paralympic.ca, Mar 2014)
Ambitions
To compete at the 2018 Paralympic Winter Games in Pyeongchang. (chathamdailynews.ca, 29 Sep 2015)
Impairment
He was born with cerebral palsy. (paralympic.ca, Mar 2014)
Other information
OTHER ACTIVITIES
He has served as vice president of Women's Sledge Hockey of Canada, and worked as an assistant coach with the Canada women's Para ice hockey team. (paralympic.org, 06 Sep 2017; Twitter profile, 05 Nov 2015)