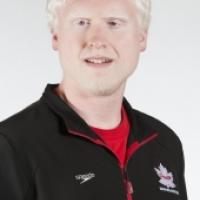 When and where did you begin this sport?
He began swimming at age nine with the Antigonish Aquanauts club in Nova Scotia, Canada.
Why this sport?
He was inspired by his older sister Chelsey, who is also a visually impaired swimmer. She represented Canada at the 2000 Paralympic Games in Sydney, winning three medals. "I started out just for fun and to stay active but things built from there. I decided one day that I wanted to compete, things escalated, and here I am."
Club / Team
London Aquatic Club: Canada
Name of coach
Andrew Craven [club]; Craig McCord [national]