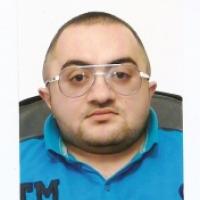 When and where did you begin this sport?
He took up swimming in 2012 in Alexandroupolis, Greece.
Why this sport?
"I went to a swimming pool just to train and have a better physical condition. Due to my illness, swimming is the best exercise because it is very difficult to get injured in the water."
Club / Team
Irodikos [GRE] / OFTHA [GRE]:
Name of coach
Giorgos Tyligadas [personal], GRE, from 2012

Most influential person in career
Coach Giorgos Tyligadas. (Athlete, 02 Dec 2017)
Hero / Idol
Greek Para swimmer Alexandros Taxildaris. (Athlete, 02 Dec 2017)
Sporting philosophy / motto
"Think outside the box." (Instagram profile, 19 Jul 2019)
Awards and honours
In 2015 he was named a distinguished citizen of Alexandroupolis, Greece, in recognition of his sporting achievements. (thrakisports.gr, 03 Sep 2015)
Impairment
He was born with osteogenesis imperfecta, also known as brittle bone disease. (Athlete, 02 Dec 2017)
Other information
OTHER ACTIVITIES
He has served as vice president of Irodikos, a sports club for people with impairments in Greece, and as a member of the management board of the non-profit organisation Perpato. He also works as a motivational speaker and aims to raise awareness of and educate people about impairments. (Facebook profile, 08 Jan 2021; TEDx Talks YouTube channel, 11 Feb 2020)

FROM RUSSIAN FEDERATION TO GREECE
He was born in Tomsk, Russian Federation, to a Greek mother and a Russian father. In 1993 he moved with his mother to Alexandroupolis, Greece. (Facebook page, 11 Aug 2017)