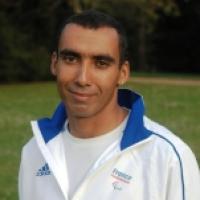 When and where did you begin this sport?
He took up athletics to help his rehabilitation after the right side of his body was paralysed at age three.
Why this sport?
He wanted to follow his brother into the sport. He soon discovered that he wanted to go faster and win.
Club / Team
Cercle Sportif de l'Institution Nationale des Invalides [CSINI]: Paris, FRA
Name of coach
Julien Hericourt [national], FRA

Nicknames
Djam (Facebook profile, 10 Jun 2013)
Injuries
His preparations for the 2012 Paralympic Games in London were hampered due to an injury he had picked up one month prior to the Games. (lemonde.fr, 26 Jul 2013)

Prior to 2008, he experienced a number of repetitive injuries to his left leg, including tendinitis, due to compensating for the weakness in his right. (leparisien.fr, 01 Dec 2008)
Sporting philosophy / motto
"I push myself from the beginning to the end. Even when I'm not well I give everything until the end. I learned that in the army." (athletesmondiaux.com, 16 Nov 2010)
Impairment
He has hemiplegia that affects the right side of his body, after experiencing a stroke as a small child. (defense.gouv.fr, 30 Aug 2012)
Other information
MILITARY SERVICE
He served as a sergeant in the French Army and passed every physical test that able-bodied soldiers are required to undertake. He refused any special treatment during his admission and served twice in Kosovo [in 2000 and 2002] as part of a peacekeeping mission. (defense.gouv.fr, 30 Aug 2012; athletesmondiaux.com, 16 Nov 2010; leparisien.fr, 01 Dec 2008, paris.fr, 17 Feb 2014)

OTHER ACTIVITIES
He has served as an ambassador of the L'Oiseau Nuage [Bird Cloud] association, which aims to improve the lives of children who are sick or impaired. Since 2010, he has worked at the Cercle Sportif de l'Institution Nationale des Invalides [CSINI], helping people with impairments adapt and integrate into society. (garnison-paris.terre.defense.gouv.fr, 01 Jul 2013; defense.gouv.fr, 10 May 2016)