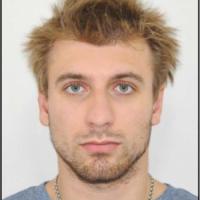 When and where did you begin this sport?
He began swimming at age 10 in Donetsk, Ukraine.
Club / Team
Dnipro School of Supreme Sports Skill: Ukraine
Name of coach
Oganes Mkrtchan [personal], from 2016; Gennady Vdovychenko [national], UKR

He has received the title of Master of Sport of International Class in Ukraine. (dsmsu.gov.ua, 28 Dec 2019)
Ambitions
To win gold at the 2020 Paralympic Games in Tokyo. (Athlete, 09 Mar 2020)
Impairment
At age 11, while returning from a swimming competition, he was hit by a car while walking across the street in Donetsk, Ukraine, and suffered a severe leg injury. He immediately underwent two emergency surgeries, followed by surgery a week later, to save his leg. (pravda.com.ua, 25 Oct 2016)
Other information
DISTRACTIONS
He endured distractions and interruptions to his training in the lead-up to the 2016 Paralympic Games in Rio de Janeiro. In 2015 he moved from Donetsk to Dnipro after a dispute with his coach, followed by a six-month break and then a four-month break. Six months prior to the 2016 Games, he resumed a regular training schedule. "As a rule, everything remains behind the scenes in big sports. Everyone sees only the result, the medals, the podium, but problems, not only for me, have always been there and always will be." (pravda.com.ua, 25 Oct 2016)