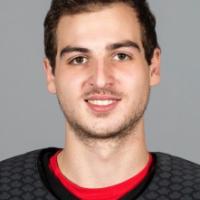 When and where did you begin this sport?
He began playing Para ice hockey in 2012 with the Mississauga Cruisers in Ontario, Canada.
Why this sport?
He was inspired to take up the sport after watching a live game. "You could fake guys out, deke them out. They were putting shots in the top corner. It was still hockey. I always think back to my first steps after my accident. I just got up out of the wheelchair and my old hockey coach, Rick Gaetz, walked in the door of our home. Right at that moment. That will always have a place in my heart."
Name of coach
Ken Babey [national], CAN
Preferred position / style / stance / technique
Forward

Nicknames
Cozzy, Dom (macleans.ca, 03 May 2016; Facebook profile, 23 Apr 2017)
Hero / Idol
Canadian ice hockey player Joe Sakic. (cbc.ca, 15 Mar 2018)
Other sports
Prior to his accident he played junior ice hockey for the Mississauga Jets in Ontario, Canada. (macleans.ca, 03 May 2016)
Impairment
He injured his spinal cord while playing in a junior ice hockey playoff match in 2009. He sustained a compression fracture to his L1 vertebra, which resulted in nerve damage. He regained the ability to walk after undergoing spinal decompression surgery. (macleans.ca, 03 May 2016)
Other information
ADAPTING TO CHANGE
He admitted that despite being an ice hockey player prior to his injury, he had a difficult time adapting to Para Ice Hockey after his injury. "I'm not going to lie, the first couple times on the ice it was tough. It was hard to get the hang of this. But I love the game so much that it was easy to put in the work and picture myself being where I am now and working to make that happen. It brought back a bunch of feelings for sure. It was a new beginning." (cbc.ca, 15 Mar 2018)

OTHER ACTIVITIES
He has served as an ambassador for the Holland Bloorview Kids Rehabilitation Hospital in Toronto, ON, Canada. (NPC Media Guide, 2018)