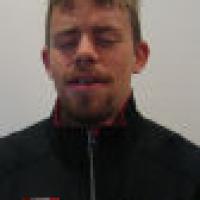 When and where did you begin this sport?
His father Larry encouraged him to participate in skiing, swimming, tandem cycling and running as a child. His father was his running guide until age 15, when he linked up with coach Don Steen.
Why this sport?
The sport enables him to challenge himself on a daily basis.
Club / Team
Langley Mustangs: Canada
Name of coach
Peter Eriksson [national], SWE; Laurier Primeau [personal]
Training Regime
He trains at the ALTIS training site in Vancouver, BC, Canada.

Nicknames
Dusty (paralympic.ca, 10 Sep 2012)
Sporting philosophy / motto
"To give anything less than your best is to sacrifice the gift." (Twitter profile, 27 Jan 2016)
Awards and honours
In January 2013 he received the Queen Elizabeth II Diamond Jubilee Medal in recognition of his performance at the 2012 Paralympic Games in London. (newswire.ca, 24 Jan 2013)

He won the British Columbia Blind Sports and Recreation Program Premier's Athletic Award in 2006. (bcblindsports.bc.ca, 23 Jun 2010)
Impairment
At age two he was diagnosed with glaucoma, and his vision progressively diminished over the next few years until he became completely blind at age 12. (paralympic.ca, 15 Aug 2015 )