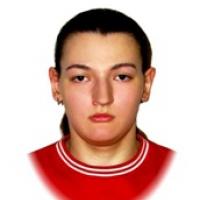 When and where did you begin this sport?
She began training at age 19 in Voronezh, Russia.
Why this sport?
Athletics coach Oleg Kostyuchenko saw her doing some exercises and suggested she try shot put and javelin throwing.
Club / Team
Specialised Children's-Youth Sport Disabled Sports School of Olympic Reserve: Voronezh, RUS
Name of coach
Oleg Kostyuchenko
Coach from which country?
Russia
Coach from what year?
2007
Training Regime
She trains for five hours a day, six days a week.

Nicknames
Lena (moe-online.ru, 28 Aug 2012)
Hobbies
Singing [she sings in a group called the 'Singing Gnomes']. (parusnad.ru, 07 May 2010; Athlete, 25 Jan 2011)
Memorable sporting achievement
Competing at the 2008 Paralympic Games in Beijing. (Athlete, 25 Jan 2011)
Most influential person in career
Her coach. (Athlete, 23 Apr 2012)
Sporting philosophy / motto
"An athlete always goes ahead and never falls back. No matter what happens on his way, he'll always be in front." (Athlete, 25 Jan 2011)
Awards and honours
She holds the title of Master of Sport of International Class in Russia. (rsport.ru, 13 Sep 2012)

For her success at the 2012 Paralympic Games in London, she received a monetary stipend from Voronezh Regional Governor Aleksey Gordeev. (london2012.rsport.ru, 13 Sep 2012)

She received recognition as one of the best athletes of the Voronezh region of Russia in 2011. (center-shvsm.ru, 26 Dec 2011)
Ambitions
To get a degree in sports studies and to win a medal at the Paralympic Games. (parusnad.ru, 07 May 2010; Athlete, 25 Jan 2011; Athlete, 23 Apr 2012)
Impairment
She was born with paraparesis, and doctors initially told her parents she wouldn't be able to walk. She could not walk until she was five but her life changed after she came to the rehabilitation centre 'The Sail of Hope' in Voronezh where she met her coach-to-be, Oleg Kostyuchenko. When she was 17 she had an operation on her legs which helped her walk better. (rfpi.ru, 21 Aug 2009; parusnad.ru, 07 May 2010; Athlete, 23 Apr 2012)
Other information
TORCH BEARER
She took part in the Sochi 2014 Olympic torch relay in her home city Voronezh. (culturavrn.ru, 15 Jan 2014)