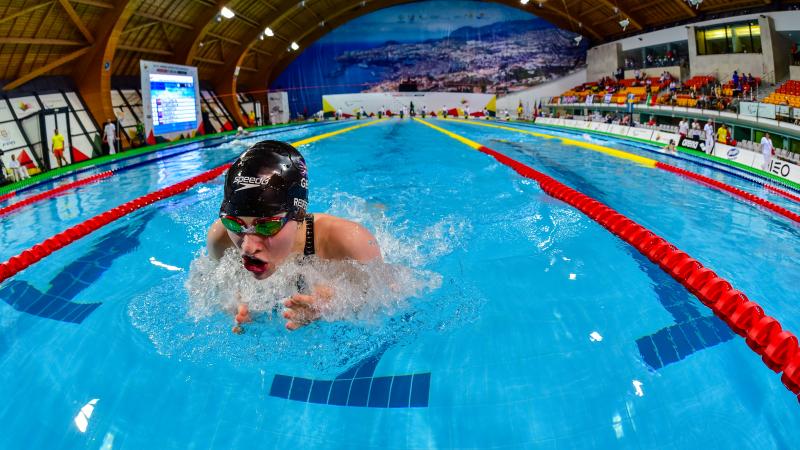 She was named the 2013 Youth Athlete of the Year by the Deutsche Sporthilfe foundation in Germany. (sporthilfe.de, 25 May 2015)

In 2012 she was named the Female Para Athlete of the Year by German sports association BVS Bayern. (bvs-bayern.com, 15 Dec 2013)

She was named the 2012 Female Athlete of the Year at the TSV Alfenfurt club in Germany. (tsvaltenfurt.de, 01 Aug 2014)

In November 2012 she received the Silbernes Lorbeerblatt [Silver Laurel Leaf] in recognition of the silver medal she won at the 2012 Paralympic Games in London. (bundespraesident.de, 07 Nov 2012)
Famous relatives
Her husband Phillip Semechin has served as her personal coach and as an assistant coach for the German national Para swimming team. (Team Deutschland Paralympics Facebook page, 02 Nov 2021; teamdeutschland-paralympics.de, 14 Apr 2022)
Ambitions
To compete at the 2022 World Championships in Madeira, Portugal, and at the 2024 Paralympic Games in Paris. (bbc.com, 27 Apr 2022)
Impairment
She was diagnosed with Stargardt disease, a condition that causes progressive vision loss, at age seven at an eye clinic in Moscow, Russian Federation. She retains 3% of her vision. (morgenpost.de, 11 Jun 2016; bbc.com, 27 Apr 2022)
Other information
POST-TOKYO BRAIN TUMOR
She was diagnosed with a malignant brain tumour after competing at the 2020 Paralympic Games in Tokyo. She underwent surgery to remove the tumour in November 2021 and returned to competition in March 2022 at the World Series event in Berlin, Germany. "One of my first questions after my brain operation was how soon can I train again. I think this is one of the most important things in life, to have goals, rather than staying at home, thinking about all the horrible things. My participation [in Berlin] is a small miracle for me. I finished my second chemotherapy cycle last Sunday [speaking in March 2022]. Competing only four days later is a strong challenge for me. But as we all know, I love challenges. The new Elena, after all those horrible things, is more relaxed, thankful, and somehow enjoying much more the little things in life." (paralympic.org, 30 Mar 2022; bbc.com, 27 Apr 2022)

PRE-SURGERY MARRIAGE
She got married to her partner and coach Phillip Semechin in November 2021, just one day before she underwent surgery to remove a malignant brain tumour. "I had one last wish before the operation. As long as I am myself, in my current life and condition, I wanted to say the 'yes' word. It was a very spontaneous but beautiful wedding. In the morning we didn't know that we could really get married." (Team Deutschland Paralympics Facebook page, 02 Nov 2021; Instagram profile, 02 Nov 2022)

TOKYO REDEMPTION
After winning silver in the SB13 100m breaststroke on her Paralympic debut in London in 2012, she was left disappointed following her fifth-place finish in the same event at the 2016 Paralympic Games in Rio de Janeiro. She said that as a result, she struggled for motivation after the Games, and that she began to focus more on the mental side of the sport. "At that time [the 2016 Games] the pressure was incredible for me, and I just couldn't deliver my performance. That was a big defeat for me at that moment, and it also took me a long time to deal with it, to find my motivation again. It felt like everything was going down the drain. I had never learned to lose before. It took me a whole season after that to figure out for myself what I actually want and how I should go on. However, I have now also learned through mental training to deal better with these expectations." At the 2020 Paralympic Games in Tokyo, she went on to claim gold in the SB13 100m breaststroke. "I had to ask a volunteer at the poolside what my time was. After that I realised I was the winner. It was very emotional for me. There was a lot of work and sacrifices for this medal so I was the happiest girl in the world." (abendzeitung-muenchen.de, 30 Oct 2020; bbc.com, 27 Apr 2022)

SWIMMING WITH A VISION IMPAIRMENT
She has Stargardt disease and retains 3% of her vision. She says she uses a combination of increased focus and a counting ritual to help alleviate the effects of her vision impairment while competing. "I know nothing about what's happening around me in those seconds [after entering the water]. That's partly because of my disability, but also my focus. I count the strokes to orientate myself. That way I know when in one more stroke there will be the wall and the turn. I can't tell what's going on in lane three, five or wherever. I worry only about myself, my technique, my race." (bbc.com, 27 Apr 2022)

PLAYBOY COVER
In September 2020 she became the first Paralympian to appear on the cover of Playboy magazine, when she featured in the German edition of the publication. "I couldn't turn down this opportunity. With the shoot, I want to set an example for more tolerance in society, so that people with a disability can create anything and not hide, even if you are not like most people, because not e