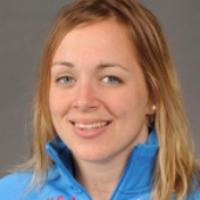 When and where did you begin this sport?
She began swimming at age 14.
Why this sport?
Swimming formed an important part of the physical therapy sessions during her recovery from the car accident that left her paralysed from the chest down.

Famous relatives
Before her accident she was a promising volleyball player, and also enjoyed football and basketball. (Waltham Daily News Tribune, 21 Aug 2008)
Ambitions
Beyond swimming she is hoping to obtain a law degree and work as an advocate for people with disabilities. (hcs.harvard.edu, 21 Jun 2007)
Impairment
She was involved in a car accident at the age of 14 which left her paralysed from the neck down. She has regained some use of her upper body since she started swimming. (Waltham Daily News Tribune, 21 Aug 2008)
Other information
HARVARD TO STANFORD
She graduated with honours from Harvard in 2008 with a degree in health care policy and began attending Stanford Law School in 2009. (usparalympics.org, 21 May 2009; swimwithmike.org, 16 Sep 2011)

STEM CELL RESEARCH
In 2006 she was selected for the America Foundation - AAPD Congressional Internship Program. The summer internship saw her working for the office of Senator John Kerry. When she heard the Senate would be debating the issue of stem cell research she asked to accompany Mr Kerry and was by his side as he gave a speech to the house. "If you ever need to be reminded of why it's morally right to lift the ban on stem cell research, just listen to Beth. She's more eloquent on this subject than any lobbyist or member of Congress," Kerry said. (aapd-dc.org, 21 Jun 2007)