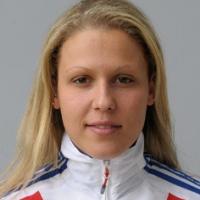 When and where did you begin this sport?
She began swimming at age three.
Why this sport?
She originally competed in able-bodied swimming, but due to the worsening of her condition she switched to Para swimming at age 15.
Club / Team
Handisport Antibes Mediterranee [HAM]: France
Name of coach
Regis Gautier [personal], from 2008

She struggled with a shoulder injury which prevented her from training the butterfly style in the lead up to the 2012 Paralympic Games in London . (france-paralympique.fr, 01 Sep 2012)
Superstitions / Rituals / Beliefs
She always takes a soft toy with her to competitions. "It's a plush. It's Pluto [fictional animated dog], but I called it Rio since I got it just before the 2016 Games." (France 3 Provence-Alpes Cote d'Azur YouTube channel, 12 Jun 2017; womensports.fr, 25 Feb 2020)
Sporting philosophy / motto
"When I'm not swimming, I don't feel like myself. I am an active person, I need to keep moving. When I'm in the water, I feel like I am in control. When I was rowing, it was strange always going backwards, but in swimming you are always moving forwards, and that makes me feel free." (Nice-Matin, 11 Feb 2020)
Awards and honours
In 2013 she was named a Knight of the Legion of Honour in France following her performances at the 2012 Paralympic Games in London. (associationadrien.org, 21 Sep 2013)
Other sports
She competed in Para rowing at the 2018 and 2019 World Championships, winning bronze in the PR3 coxed four mixed at the 2018 edition in Plovdiv, Bulgaria. (worldrowing.com, 13 Feb 2018; SportsDeskOnline, 12 Aug 2020)
Ambitions
To compete at the 2024 Paralympic Games in Paris. (Facebook profile, 21 Jan 2021)
Impairment
She has restricted movement in her lower left leg as the result of a rare congenital illness. (France 3 Provence-Alpes Cote d'Azur YouTube channel, 12 Jun 2017; lejdd.fr, 04 Nov 2009)
Other information
MATERNITY BREAK
She took a time off sport in order to give birth to her first child in 2021. (Facebook profile, 21 Jan 2021)

SWIMMING TO ROWING AND BACK
In 2018 she decided to switch from Para swimming to Para rowing after struggling with motivation in Para swimming. After competing in Para rowing for around two years and helping the PR3 coxed four mixed team qualify for the 2020 Paralympic Games in Tokyo, she decided to return to Para swimming in January 2020 with a view to competing in the sport at the 2020 Paralympic Games in Tokyo. "I felt sort of fed up with swimming, like I had come full circle. I just didn't care about going to training anymore. I tried rowing because I was offered to try it. It all went well at the beginning, but then I realised it was not actually my type of environment, and the values were not quite the same. Maybe I was expecting too much, and it was also complicated for me to access the training location as I finished my studies too late at night. Over time I slowly returned to swimming in a club in Cannes and I realised that I missed it. But the rowing coach didn't accept that I take part in both sports, and so I felt alone and called my former swimming coach before deciding to return to swimming. I rediscovered the pleasure in swimming, something that I had lost." (Nice-Matin, 11 Feb 2020)

FURTHER STUDIES
She studies as a childcare assistant at the Institute of Formation of Professions for Child and Adolescence [IFMEA] in Nice, France. (Nice-Matin, 11 Feb 2020)