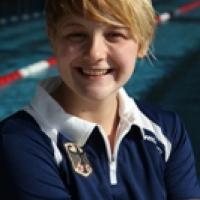 When and where did you begin this sport?
She took up the sport in 2007 when she competed in a swimming competition at a school for children with visual impairments.
Why this sport?
Her coach at school noticed her ability and encouraged her to pursue the sport. "At first, I began training twice a week. Then later at the sports school, the training load became higher. At some point, when I noticed that I really loved the sport, I wanted to be very successful."
Training Regime
She trains 25 hours a week.