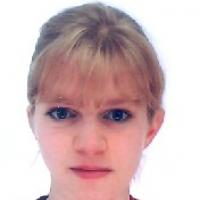 When and where did you begin this sport?
She began swimming at age four.
Why this sport?
It was recommended by her doctor as a good way to protect her bones.
Name of coach
Rob Greenwood [national]
Coach from which country?
Great Britain

Hobbies
Spending time with friends, going to the theatre. (eastswimming.org.uk, 12 Jul 2010)
Memorable sporting achievement
Representing Great Britain at the 2009 European Championships and qualifying for the British Disability Development squad. (essexlegacy.org, 01 May 2010)
Hero / Idol
Former British tennis player Sue Barker because of her achievements in sport and subsequent media career after retirement. (essexlegacy.org, 01 May 2010)
Injuries
She suffered a broken ankle in early 2011. (loughboroughswimming.com, 10 Apr 2011)

She injured her right trapezius in the early summer of 2010. (essexlegacy.org, 01 May 2010)
Awards and honours
She was named Outstanding Female at the 2010 Nationwide Junior Sports Awards. (clients.r-evolution.co.uk, 15 Dec 2010)

She was chosen as an Essex Ambassador in 2010. (clients.r-evolution.co.uk, 15 Dec 2010)
Famous relatives
Her brother James has represented Great Britain in para-swimming. (swimming.org, 20 Apr 2014)
Impairment
She has a condition that results in brittle bones. (loughboroughecho.net, 18 Nov 2011)