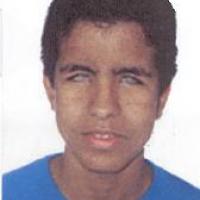 When and where did you begin this sport?
He began swimming at age 13.
Why this sport?
He believes swimming has given him self-confidence, which he has been able to draw on in his studies, personal life, working life and sporting career.
Club / Team
Club Deportivo GSD: Spain
Name of coach
Jose Luis Vaquero [national, personal], ESP
Training Regime
He trains at the High Performance Centre in Madrid, Spain.

Hobbies
Watching films. (locasporvivir.com, 17 Dec 2019)
Most influential person in career
His parents. (locasporvivir.com, 17 Dec 2019)
Superstitions / Rituals / Beliefs
He listens to music by hard rock band Metallica before competing. "That is the sign that means 'competition mode' for me." (marca.com, 08 Sep 2019)
Sporting philosophy / motto
"There is something that limits more than an impairment, the inability to accept others." (Twitter profile, 04 Aug 2019)

He was flag bearer for Spain at the closing ceremony of the 2008 Paralympic Games in Beijing. (enhamed.com, 01 Jun 2011)

He has been given the Gold Medal for Sporting Merit by the city of Las Palmas de Gran Canaria, Spain. (enhamed.com, 01 Jun 2011)

He has received the Royal Order Gold Medal for Sporting Merit from the government of Spain in recognition of his Paralympic achievements. (enhamed.com, 01 Jun 2011)
Other sports
He completed the 2014 Lanzarote Ironman in Spain. He has also climbed Mount Kilimanjaro in Tanzania and run the New York Marathon in the United States of America. (eyesynth.com, 30 Nov 2018; triatlonnoticias.com, 22 Feb 2016; marca.com, 17 May 2014)
Ambitions
To compete at the 2020 Paralympic Games in Tokyo. (marca.com, 05 Jun 2019)
Impairment
At age eight he was playing outside and fell over, which caused him to lose his sight. Doctors later diagnosed retinal detachment as the cause. (cope.es, 24 Apr 2019; enhamed.com, 01 Jun 2011)
Other information
RETIREMENT AND COMEBACK
He retired from swimming following the 2012 Paralympic Games in London due to a lack of motivation for the sport. He returned to the pool in 2019. "While preparing for an ultraman competition I felt I was enjoying being in the swimming pool again. I competed at the Spanish championships and was elated to feel the adrenaline again, to smell the chlorine, to feel the nervousness of the other swimmers. All this led me to an emotional and mental state that I like and that I had missed." (marca.com, 05 Jun 2019; cuatro.com, 05 Oct 2014)

AUTHOR
He has written a book called 'Ironmind', in which he reflects on his experiences and gives advice on how to get ahead in life and overcome obstacles. "Life is about experiences, adventures and trying to achieve our goals in a passionate way. It is our fears that limit us to an insipid life. You have to cross those limits to enjoy everything the world has to offer. This book can help anyone to fulfil their dreams." (triatlonnoticias.com, 22 Feb 2016)

EARLY LIFE
He is the fifth of six children. Born in Spain, he spent his first seven years in the Sahara desert in Africa, where his family are originally from. He returned to Spain at age eight. (enhamed.com, 01 Jun 2011)