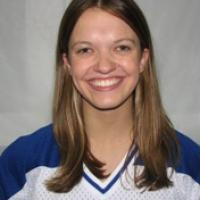 When and where did you begin this sport?
She began competitive swimming at the age of 12.
Why this sport?
Her height was less of a disadvantage in swimming than it was in the other sports she tried at school.
Name of coach
Dave Denniston [national]
Training Regime
She spends around four hours a day in the pool or weight room, six days a week.

Nicknames
Po, E, E-Po. (usaswimming.org, 15 Aug 2011)
Memorable sporting achievement
Her seven gold medals at the Paralympic Games in Athens, 2004. "Athens, I don't think I can say enough about it," she said. "Never in a million years did I imagine that would happen." (Great Falls Tribune, 03 Sep 2008)
Awards and honours
She was named Swimming World Magazine's 2005 Swimmer of the Year with a Disability. (US Paralympics, 05 Mar 2010)

She was named Individual Sportswoman of the Year for 2005 by the Women's Sports Foundation. (US Paralympics, 05 May 2010)

Impairment
She was born with achondroplasia [dwarfism], causing her to have shortened arms and legs. (colstate.edu, 05 Mar 2010)