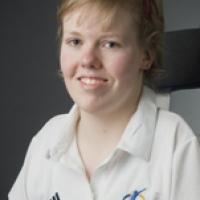 Hobbies
Reading, music, collecting teddy bears. (Athlete, 29 Apr 2011)
Memorable sporting achievement
Competing at the 2008 Paralympic Games in Beijing. (Athlete, 29 Apr 2011)
Most influential person in career
Her mother. (paralympic.org.au, 6 Jan 2010)
Hero / Idol
Australian swimmers Petria Thomas, Grant Hackett. (vis.org.au, 03 Aug 2011)
Injuries
She has broken her arms more than 40 times as a result of her impairment. In 2008 she broke her arm at a staging camp just a day before the Australian team arrived in Beijing. She had also had a collapsed lung seven weeks earlier. (paralympic.org.au, 6 Jan 2010)
Superstitions / Rituals / Beliefs
Her toenails must be painted and she must eat Weet-Bix the morning of the race. (Athlete, 29 Apr 2011)
Sporting philosophy / motto
"There's nothing I can't do, I'll just try a different way." (paralympic.org.au, 6 Jan 2010)
Impairment
She has arthrogryposis multiplex congenita, a disorder which affects the joints and makes bones more susceptible to breaking. (paralympic.org.au, 6 Jan 2010)
Other information
RETIREMENT
She announced her retirement in April 2013, after a lack of competitors in her classification led to the cancellation of her event at the 2013 World Championships in Montreal, Canada. "My swimming career has provided me with many amazing opportunities and experiences. Even though it has been extremely tough at times, I wouldn't trade it for anything." (london2012.paralympic.org.au, 24 Apr 2013)