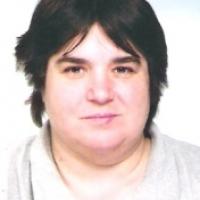 When and where did you begin this sport?
She took up Para athletics in 1997 in Olomouc, Czech Republic. She initially took up javelin and started focusing on shot put in 2011.
Why this sport?
She was tired of sitting at the rehabilitation centre and wanted something to do. "I am a temperamental person and I did not want to just sit in a wheelchair. Practising sports was a means to integrate into society. I lost a lot of friends because of the accident, but I also gained new ones."
Club / Team
AK Olomouc: Czech Republic

In December 2007 she sustained a whiplash injury, which took seven months to recover from. In January 2011 she was out for three months with a torn muscle. (Athlete, 23 Apr 2012)
Sporting philosophy / motto
"It is the heart that shows us the truth. Eyes cannot reveal the real thing." (Athlete, 23 Apr 2012)
Awards and honours
She was named the 2014 Athlete with an Impairment of the Year of Olomouc, Czech Republic. (caths.cz, 05 Feb 2015)
Impairment
She sustained a spinal cord injury as a result of a skiing accident in 1996. (bezeckaskola.cz, 24 Sep 2019; paralympic.cz, 20 Oct 2009; expats.cz, 15 Sep 2009)
Other information
OCCUPATION
She has been chairperson of the Para athletics section at Olomouc Athletics Club in the Czech Republic and a member of the athletics commission at the Czech Association of Para Athletes [CATHS]. She has also been a councillor for Sumperk, Czech Republic. (paralympic.cz, 01 Aug 2020; bezeckaskola.cz, 24 Sep 2019; caths.cz, 01 Jan 2018; atletikavozickaru.cz, 24 Jul 2020; atletikaolomouc.cz, 12 Mar 2017)

EARLY DAYS
She grew up in an orphanage in the Czech Republic where she was left by her parents, who came from Greece. Growing up she could not do sport for medical reasons. She was diagnosed with a lung condition at age nine and spent almost a year in a hospital in Olomouc, Czech Republic. She also lost a kidney at age 18. "I never practised sports prior to the accident. I was excused from any kind of physical activity because of my severe lung condition as a child. At the time they told me that sports was not an option. My biggest success? The fact that I didn't give up when I ended up in a wheelchair." (bezeckaskola.cz, 24 Sep 2019; hanackenoviny.cz, 03 May 2018)

PARALYMPIC EXPERIENCES
At age 51 she competed in her fourth Paralympic Games, at the 2016 Games in Rio de Janeiro, and placed eighth in the F54 shot put. "I never expected to get to so many Paralympic Games and never hoped to play sports in my 50s. [At the 2016 Games] when I looked at my opponents, I thought, 'Here we go, grandma's coming'. Everyone was like 25 years younger than me. The joy was even greater." (the-sports.org, 25 Aug 2018; hanackenoviny.cz, 03 May 2018)

BOOK
She released a book called 'Jsme lide' [We Are People] in 2001. The book focuses on her experiences of having an impairment and her work for other people with impairments. (hanackenoviny.cz, 03 May 2018; mlp.cz, 01 Jan 2019)