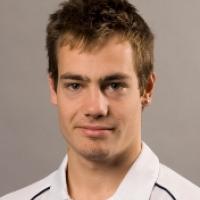 When and where did you begin this sport?
He took up athletics at school, where he also participated in able-bodied rowing and rugby union. He was recruited to Para sport in 2005 after being spotted by Australian talent scout and Paralympian Amy Winters.
Why this sport?
His athletics coach at school realised he had an impairment and put him in touch with coach Iryna Dvoskina. "I like athletics because it is a basic in almost every sport. Everyone can do it, but not many people can do it well. When you run you are on show and you cannot hide in a team. It is pure."
Name of coach
Iryna Dvoskina [national], UKR

He underwent hernia surgery after the 2018 Commonwealth Games in Gold Coast, QLD, Australia. (paralympic.org, 22 May 2019)

In July 2013 he was ill with viral meningitis. Although he took part in the 2013 World Championships in Lyon, France, he was taken to hospital soon after racing. He returned to competition in April 2014. (smh.com.au, 18 Apr 2014)
Sporting philosophy / motto
"I [am] attempting to run fast enough so that people would wake up and look at Paralympic sport seriously. I never rock up to an athletics event like a Paralympics or world championships thinking that it's nice just to be there." (athletics.com.au, 29 Jan 2021)
Awards and honours
In 2012 he was named Male Para Athlete of the Year by Athletics Australia. (paralympic.org, 12 Feb 2013)

In 2012 he was Australia's flag bearer at the closing ceremony of the Paralympic Games in London. (paralympic.org, 01 Mar 2015)

In 2008 he was named Australian Institute of Sport [AIS] Junior Athlete of the Year. (ausport.gov.au, 06 Jan 2010)
Other sports
He represented Australia in bobsleigh [able-bodied] at the 2021 World Championships in Altenberg, Germany. (SportsDeskOnline, 23 Feb 2021; athletics.com.au, 29 Jan 2021)
Milestones
At the 2008 Paralympic Games in Beijing, he became the first athlete with cerebral palsy to run under 11 seconds in the 100m. Days later he also became the first cerebral palsy athlete to break the 22-second barrier in the 200m. (paralympic.org, 28 Feb 2013)
Famous relatives
His wife Zuzana O'Hanlon represented the Czech Republic in the 20km race walk at the 2008 Olympic Games in Beijing. His parents and his sister have all represented Australia in rowing. (SportsDeskOnline, 06 Dec 2018; paralympic.org.au, 07 May 2016, 06 Jan 2010; smh.com.au, 24 Oct 2014)
Ambitions
To win a gold medal at the 2020 Paralympic Games in Tokyo, and to compete on the able-bodied Australian bobsleigh team at the Olympic Winter Games. (athletics.com.au, 29 Jan 2021)
Impairment
He has cerebral palsy as the result of a stroke before birth. (Athlete, 06 Nov 2019)
Other information
BOBSLEIGH
He became interested in bobsleigh while watching the 2018 Olympic Winter Games in Pyeongchang. One of his trainers had competed in bobsleigh for Hungary, and he told O'Hanlon that he would be physically capable of competing in the sport at an elite level. He began training to pilot the sled, and has ambitions to compete at the Olympic Winter Games. "It's not just reacting to what's in front of you. I have to memorise the track because when you're going at 120 kilometres an hour there's no way you can react, you have to know what's coming. Once you've crashed you kind of get over it a little bit, it's not that bad. It's more the frustration when I crash because I'm responsible for somebody else as well in the back of the sled. I want to become an Olympian because I want to add that to my titles but I'm not trying to take anything away from being a Paralympian either - they're two totally different things and neither of them is better than the other. If I didn't try it, I knew I would've been that 50 or 60-year-old at the pub saying they could have done bobsleigh." (athletics.com.au, 29 Jan 2021; paralympic.org, 22 May 2019)

RETIREMENTS AND RETURNS
He retired from Para athletics after winning a silver medal in the T38 100m at the 2016 Paralympic Games in Rio de Janeiro, due to financial reasons. However, his father Terry later convinced him to move to Sydney, NSW, Australia, and start working part-time for his architecture business to fund and continue his athletics career. He retired for a second time after winning gold at the 2018 Commonwealth Games in Gold Coast, QLD, Australia, only to change his mind while rehabilitating from an operation he had on a hernia problem shortly after the Games. In October 2018 he and his family relocated to the Czech Republic [where his wife Zuzana O'Hanlon is from] so he could focus fully on his sporting career. "I knew if I was going to do it I couldn't stay in Sydney, as I would have to do athletics full-time and I wouldn't be able to have a job or afford to live in Sydney." (athletics.com.au, 29 Jan 2021; paralympic.org, 26 Feb 2019; canberratimes.com.au, 04 Jan 2017)