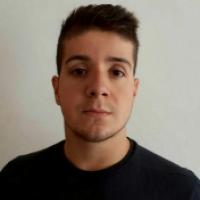 When and where did you begin this sport?
He began swimming in 2002 in Rosario, Argentina and took up Para swimming seriously in 2012 at the Sportsmen Unidos club.
Why this sport?
"I have always been involved in aquatic sports. I love the sport and it is where I improve myself."
Club / Team
Club Nautico Sportivo Avellaneda: Rosario, ARG
Name of coach
Fernando Arregui [father], ARG, from 2012

In 2014 and 2016 he was presented with the Jorge Newbery Award as Para Swimmer of the Year in Argentina. (Facebook page, 28 Apr 2019; natacionsportsmen.com.ar, 29 May 2014)
Other sports
He competed in Para open water swimming at the 2018 Rosario Beach National Games in Argentina. (infobae.com, 01 Dec 2018)
Famous relatives
His father Fernando has represented Argentina in water polo and competed at the 2011 Pan American Games in Guadalajara, Mexico. His sister Camilla has represented Argentina in artistic swimming and competed at the world championships in 2017 and 2019. She also won five golds and one silver at the 2016 Pan American Championships in San Juan, Puerto Rico. (SportsDeskOnline, 17 Jun 2021; conlagentenoticias.com, 05 Jul 2018; paradeportes.com, 11 Nov 2015; lacapital.com.ar, 23 Oct 2013)
Impairment
He has spina bifida [myelomeningocele]. (Athlete, 12 Sep 2019)
Other information
SURGERY AND DEPRESSION
He underwent bladder surgery in 2018 and was unable to move for a month after the operation. The experience led to a period of depression that was heightened on his return to swimming and lasted until mid 2019. "The post-operative period was very hard, I was hospitalised for a week without being able to eat or drink and I then had a month of being unable to move on my own. That lowered my self-esteem. I did not feel that my body was mine and all this made me fall into a depression from which it was difficult for me to get out. Over time that feeling diminished enough for me to compete again but everything had changed. The times didn't work out for me and I didn't enjoy it. Going to training became torture. All that hell lasted about a year but, with psychological help and all the love from my family, I was able to get out of that dark period. I had thought that surgery had ruined my life. But it ended up being quite the opposite and made me reconsider what I wanted from the future." (paradeportes.com, 08 Sep 2020)