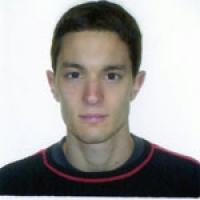 When and where did you begin this sport?
He took up swimming at age six in Balcarce, Argentina.
Why this sport?
His doctors recommended he should try the sport, and he enjoyed it.
Club / Team
Club Racing Balcarce: Argentina
Name of coach
Walter Carballo [personal], ARG, from 2012

In 2014 and 2015 he received the Golden Fangio Award, given to the best sportsperson in the city of Balcarce, Argentina. He is the first athlete to win it twice in a row. (diariolavanguardia.com, 20 Feb 2015; 31 Jan 2016)
Impairment
He is missing his left arm below the elbow due to agenesis [failure of an organ to develop during embryonic growth]. (Athlete, 14 Jul 2015; diariolavanguardia.com, 16 Nov 2011)
Other information
OTHER ACTIVITIES
He was a volunteer firefighter before taking up his sport coaching studies. (edant.ole.com.ar, 29 Aug 2008)