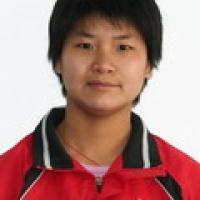 When and where did you begin this sport?
She took up Para athletics in 1999 in Tianjin, People's Republic of China.
Why this sport?
She was recommended to the local federation for athletes with an impairment following some good performances at sports meetings.

Nicknames
Fangfang (Athlete, 24 Jan 2011)
Injuries
She missed the T36 100m final at the 2011 World Championships in Christchurch, New Zealand, after pulling her hamstring the day before the race. (morethanthegames.co.uk, 26 Jan 2011)
Awards and honours
In 2008 she received the May 1st Labour Medal from the city government in Tianjin, People's Republic of China. (tianjinwe.com, 27 Sep 2008)

She has received the May 4th Youth Medal in the People's Republic of China. (ccyl.org.cn, 19 Sep 2008)
Impairment
She was born with encephalomeningitis [inflammation of the brain and spinal cord], and was later diagnosed with cerebral palsy. (qq.com, 01 Sep 2008)